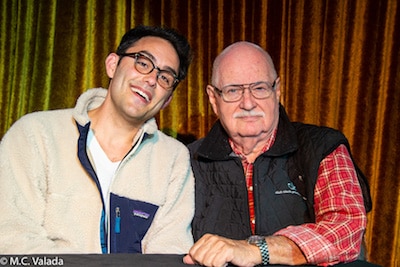 September 6, 2019
This episode of Go Fact Yourself features quick wits and facts about hit flicks!

Jena Friedman is a comedian and longtime contributor to television, perhaps her best known work was as a producer on “The Daily Show.” She’ll talk about how she was so dedicated to her work on the show that she was willing to risk her life if it meant getting the shot that she needed. Jena’s new series “Soft Focus” is on Adult Swim.

Jena’s opponent is Jack O’Brien, co-host of “The Daily Zeitgeist” podcast. Before that, he was the co-founder of Cracked.com. How did he turn the website into such a success? Well, he decided to take everything that worked about the original Cracked magazine… and completely ignore it. He’ll explain.

The guests will take a deep dive into the lore of the Jaws franchise, the history of comedy and why it is never a good idea to take a bath at a funeral.

What’s the difference between a fire engine and a fire truck?

What’s the difference between a pandemic and an epidemic?

Jena Friedman: The TV show “Ghostwriter,” the history of improv and the ebola virus.

Jack O’Brien and Carl Gottlieb
Carl Gottlieb, Screenwriter of Jaws and author of The Jaws Log.