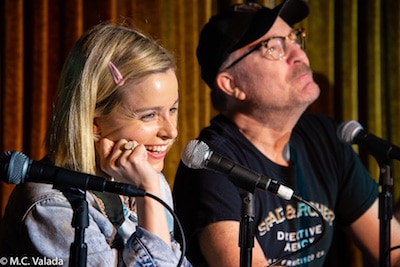 Jim Beaver is an actor who’s known for his roles in TV shows like, “Breaking Bad,” and, “Justified,” where he’s earned a reputation as a “tough guy”-type who’s usually associated with guns. He’s also done a lot of research on major Hollywood figures from other eras. He’ll explain why he didn’t let the technological limitations from his youth get in the way of his research of actor John Garfield. Jim Beaver can be seen in the final season of “Supernatural”.

Jim will face off against Erica Rhodes, who’s currently tearing it up on NBC’s “Bring The Funny” and who had a memorable turn on “Modern Family”. She’s been involved in show-business since she was 10 as a voice on the radio-drama “Prairie Home Companion”. Erica’s newest comedy album is “Sad Lemon” and she’ll explain how she settled on the title after a little crowdsourcing.

The guests will discuss classic musicals set in France, American traitors and the finer aspects of going Dutch.

What’s the difference between Holland and The Netherlands?

What’s the difference between a levee and a dike?

Erica Rhodes: The film The Umbrellas of Cherbourg, philosopher Friedrich Neitzsche, and the poet William Wordsworth.