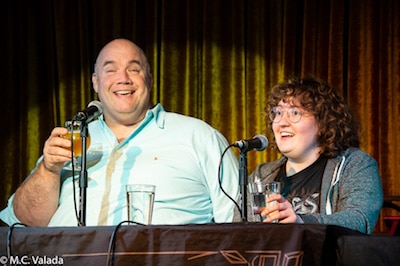 In honor of the #MaxFunDrive, Go Fact Yourself presents a special network crossover!

Guy Branum is a comedian and host of the podcast “Pop Rocket”. He’s also a pop culture savant, as detailed in his book My Life as a Goddess. If you want to know more about the pop culture he loves, you’ll have to read the book… but he’s happy to provide a glimpse through some of his answers today.

His opponent is a fellow comedian for whom he has a lot of respect (and fear): Emily Heller! You can hear her as the host of the podcast “Baby Geniuses”. Her show is all about explaining things. Today she’ll key in on a very important topic: Martha Stewart’s barnyard animals.

From personal heroes to classic television to the subtleties of regional coffee pot designs, this episode has it all.

This show is directly funded by our Maximum Fun Members. As part of our annual #MaxFunDrive, you can sign up for as little as $5 a month at maximumfun.org/donate to help support this and other Max Fun shows you listen to AND earn great gifts in the process!

What’s the difference between a teapot and a coffee pot?

What’s the difference between phlegm and mucus?

Emily Heller: The TV show “Frasier”, the musical group Indigo Girls and how to have a good time at Disneyland.